After years of chronic bowel problems, nausea, frequent after-dinner vomiting, abdominal pain, an incredible amount of medication and a desperate quest for solutions, The Sit Smart Diet crossed her path. Now Ellen de Boer (58) finally has her appetite back, and most of her symptoms are greatly reduced or have even completely disappeared. “I eat much better and tastier than ever before, and I no longer suffer from nausea and stomach pains. And thanks to this way of eating I even have been spared the ordeal of a stoma!”

Thanks to The Sit Smart Diet I live and thrive again! 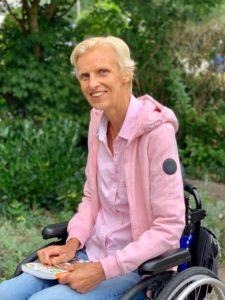 Ellen’s life was changed forever by a drunk driver in a crash nearly 36 years ago. “It all happened very quickly, one moment I was still on my bike, the next I was lying on the roadside. In the hospital it turned out that I had a double pelvic fracture and a bleeding in my spinal cord, and therefore a partial paraplegia. This means that I spend a lot of time in my wheelchair, but can still walk a little with the help of a crutch ”.

After her accident, Ellen went through a rough time. A 7 month-long period of recovery and daily rehabilitation in the hospital began. “First my two serious pelvic fractures had to heal, and because I had been lying in one position for so many weeks, I appeared to have severe bedsores. I wasn’t aware of that, hadn’t noticed anything, I was in shock because this was completely new to me. There was no attention in the hospital for emotional guidance, lifestyle and nutrition. I had physiotherapy, and that was all. This was what one apparently understood by “rehabilitation”.

No attention was paid to lifestyle and nutrition during my rehabilitation.

After her stay in the hospital an ever more difficult time followed. Ellen was 22 years old, in the prime of her life  in her graduation year at the laboratory school, and had a boyfriend. Life was smiling at her. But her accident brought her promising life to a sudden halt. Her relationship didn’t work out, she could not finish her education and the doctor told her that it was not advisable for her to have children of her own. Also her student house was not wheelchair adapted, so it was impossible for her to return home.

The’re was no other option for Ellen then to go to a house of accommodation for seriously ill people: “It was a place with ill people, old people, or depressed people who, like me, also were temporarily unable to live in their own house. I didn’t like the atmosphere. I withdrew into myself and was silent. Even then, I already noticed that I had serious problems with my intestines. I was laxed at the hospital, but that stopped after my discharge. I had not such a good contact with my family doctor. The only advice I got from him was that I simply had to eat more“. 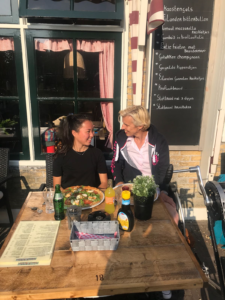 In 1990 Ellen meets a man and they get married. The couple gets two beautiful adoptive daughters. “I was over the moon, because my biggest wish came true: I became a mother!” She suffers from asthma and spasms and is therefore very tired because she sleeps poorly at night. Due to the lack of sleep (she sleeps 4-5 hours a night at most), she loses a lot of weight and weighs less than 50 pounds with her 1.76.

Her intestines are also not working properly. Ellen suffers a lot from abdominal pain and is often nauseous after eating. “I often had a feeling of “stacking” when eating. If I ate some food in the evening, for example a slice of cake at a party, I immediatley had to theow up and still felt sick the next day. I was also increasingly less able to walk”.

The relationship with her husband deteriorates and a divorce follows in 2009. “I once again fell into a deep hole and was mentally and physically exhausted. Because of the divorce, an additional stress factor was added, because I myself was not able to do grocery shopping, bringing the children to school, preparing breakfast, these were things my husband always did. So in order to save myself again, I started rehabilitating for the second time. I was again a big turningpoint in my life”.

Ellen recovered in St. Jansdal in Harderwijk. Now, unlike in the 1980s, she díd get occupational therapy, social work and a psychologist. However, there was still no attention for lifestyle and nutrition. “Despite all my intestinal complaints, I received no advice about nutrition”. Ellen’s complaints gopt worse and worse, so she was referred to a gastroenterologist in the spring of 2018. “My intestines were so clogged that my stomach was under pressure. My body no longer reacted to medication such as Movicol (4-6 bags) and Moviprep. Then I was prescribed Linaclotide, another laxative medicine against intestinal cramps and abdominal pain. But that medicine also hardly helped. I actually responded to everything with vomiting”.

The gastroenterologist recommended a stoma.

Ellen received guidance from a gestroenterology nurse for colon flushing and nutrition, and from a dietician. “This was a dietitian who was extreme overweight, something that struck me as rather odd. She recommended mainly to eat a lot and increase my protein intake, an advice which resulted in even more constipation. When I asked her if she had specific knowledge of spinal cord injury and nutrition, she immediately felt offended and became extremely hostile – how dare I ask such a thing!

When I asked the dietician if she had specific knowledge of spinal cord injury and nutrition, she became agressive.

I later discovered that she was talking negatively behind my back, as if I had done something wrong. I then approached her and reminded her of her medical professional secrecy. A few days later I received a letter from her in which she explained to me how good she was as a dietician. Meanwhile I got sicker and sicker, my health complaints only got worse. The gastroenterologist therefore recommended me a stoma”. 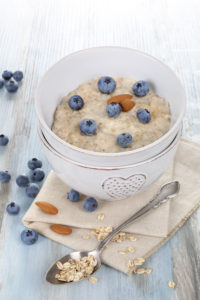 Ellen started a search and carefully started making changes to her diet. “For example, my breakfast became a smoothie with soy yogurt, but I couldn’t find any real solutions. Until I read Annemarie’s reports about the harmful effects of wheat and the benefits of oatmeal, for example. My lunch became oatmeal porridge with oat milk and blueberries, and … the nausea and abdominal pain disappeared! 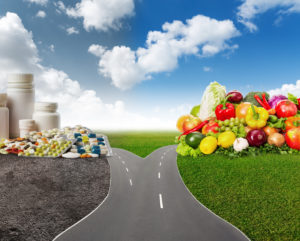 Mindfulness also plays a major role in my life. And that is Sit Smart food for me too: mindful, so eating quietly, with full attention and awareness. I also noticed during the summer holidays that I was less tired, not nauseous, and had no abdominal pain. I often suddenly felt that enthusiasm and spontaneity in me that I used to have when I was younger. I have been eating this way for about 3 months now, and I experience it as an exciting (and fun) journey.

From 2001 I used to take Domperidon daily against nausea, medication that I now no longer need.

Ellen’s medication has also been changed due to The Sit Smart Diet. “I used to take Domperidone against nausea on a daily basis since 2001. By changing my diet, I was was able to completely stop using this drug. I also increasingly took the painkiller Diclofenac, but I was able to stop using that as well. I now only use it every now and then, when I have extreme severe pain complaints”. Ellen is being treated by a gastroenterologist, urologist, rehabilitation doctor and general practitioner. I have informed my family doctor that I eat according to the Sit Smart method. She knows that I no longer use Domperidone and Diclofenac every day, and she supports me”.

Ellen’s daughter Qin Lin also notices the change with her mother and is happy. “Since my mother started following the Sit Smart Diet many daily products have changed with her. I see a clear difference in complaints and I think she is fitter and more active. I personally love The Sit Smart recipes in the book as well, so we often prepare meals together, and it’s healthy for the both of us, so it’s a win-win situation!

At first it felt a bit strange not eating bread anymore. 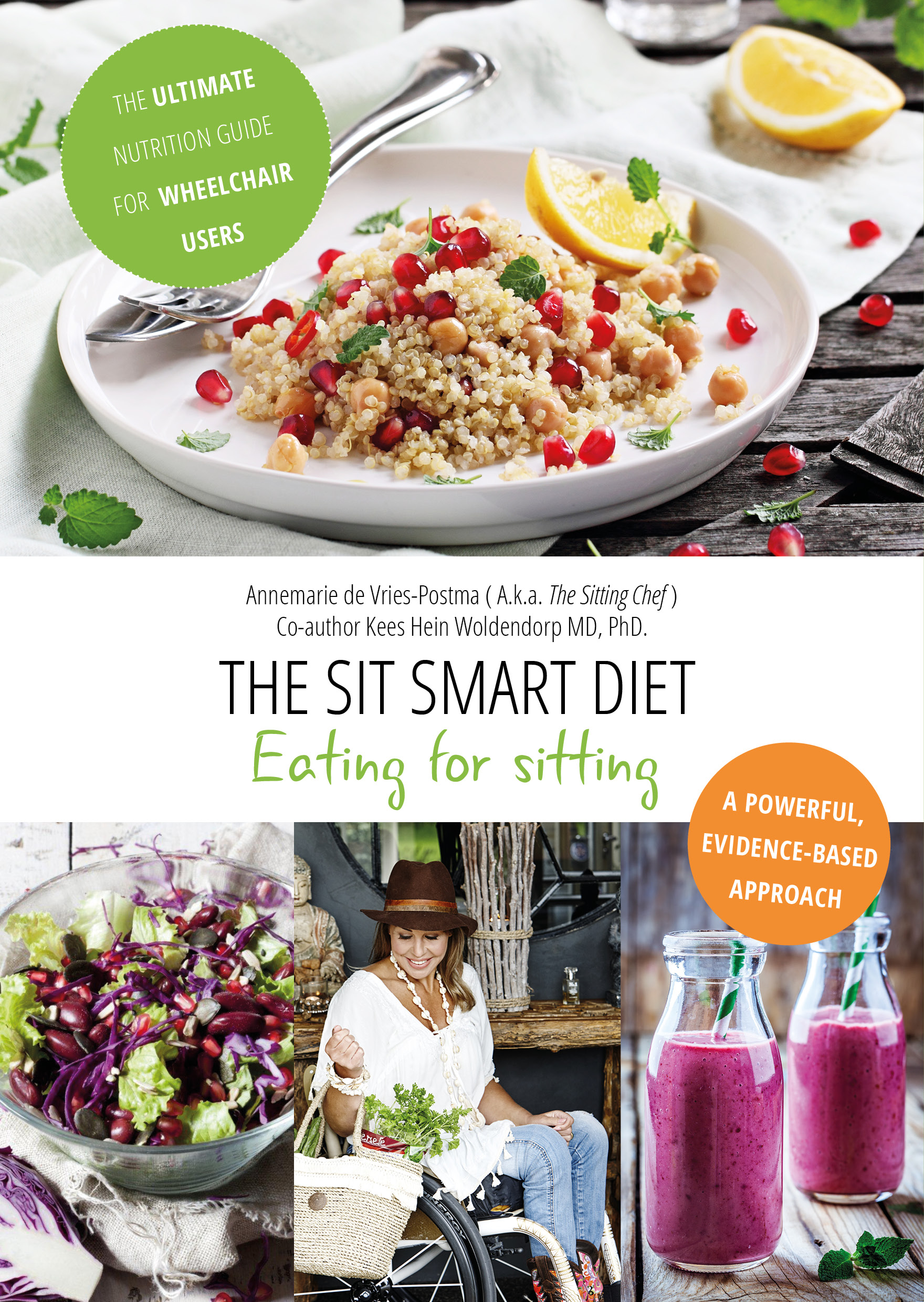 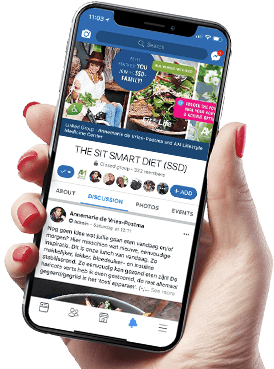 Need even more motivation? Want to share your experiences, ask questions, and get inspired by others?

as a speaker for your next conference or event!

And get the latest scientifically proven medical and nutritional news, delicious new recipes and more!